An OxCD3 team has won the 2016 “Jorge Heller Journal of Controlled Release Outstanding Paper Award”, which specifically recognizes major advances in the delivery of bioactives.

The award for the paper "Increasing the Density of Nanomedicines Improves Their Ultrasound-mediated Delivery to Tumours" will be presented to corresponding author Prof. Bob Carlisle during the Controlled Release Society Award Ceremony at the 2016 CRS Annual Meeting in Seattle, Washington, U.S.A. 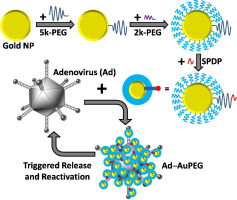 Professors Bob Carlisle, Len Seymour and Constantin Coussios are regular contributors to the Journal of Controlled Release and have previously demonstrated that ultrasound-induced inertial cavitation enhances the extravasation and delivery of an oncolytic virus in vitro (JCR 157(2): 235-242, 2012) and in vivo (JCR 169:1-2: 40-47, 2013), whilst also improving its penetration and distribution throughout the tumour (J. Nat. Cancer Inst. 105 (22): 1701-1710, 2013).

The award-winning paper (JCR 210: 10–18, 2015) demonstrates that significant increases in the density of nanomedicines can greatly enhance their delivery, penetration and distribution to tumours  under ultrasound exposure in the presence of cavitation nuclei. To achieve this, the authors describe a novel  'dandelion' modification consisting of gold nanoparticles conjugated to PEG (Polyethylene glycol) that can be applied not only to viruses but generally to nanomedicines to increase their density by a factor of three. An added benefit of the dandelion modification is greatly increased circulation, which is expected to facilitate the systemic delivery of oncolytic viruses.